Emulsified Biodiesel (EBD) can be direct substitutes in most diesel and biodiesel applications including, compression ignition engines (high, medium and low speed diesel engines), combustion turbines, furnaces and boilers. The water content of APT’s EBD will vary depending on its application and the original amount of biodiesel concentration with the diesel. However, the overall water and additive contents are similar to APT’s DOE technology.

Biodiesel is a clean burning alternative fuel derived from renewable sources and is the only alternative fuel to have a complete evaluation of emission reductions and health effects compared with traditional diesel fuel and submitted to the United States Environmental Protection Agency (USEPA) under the Clean Air Act.

Despite the various benefits, a major hurdle for commercialization of biodiesel blends is the problem of elevated NOx emissions. USEPA studies have shown increases in NOx emissions of 2% and 10% from utilizing B-20 (an emulsified biodiesel) and B-100 (pure biodiesel), respectively.

Biodiesel is a fast-growing component of the transportation fuels sector. Biodiesel production in the U.S. for example, increased from 500,000 gallons in 1999 to an estimated 75 million gallons in 2005. The growth in the production and consumption of biodiesel and biodiesel blends is being driven by both environmental and petroleum supply concerns:

APT’s biodiesel emulsions take advantage of the natural ability of biodiesel to reduce PM emissions, while reducing higher NOx emissions that typically increase with biodiesel. A study conducted by the USEPA illustrates these trends (refer to Figure 1 below). Testing reported by the Society of Automotive Engineers (SAE) and “proof of concept” testing have confirmed that emulsified B-20 can reduce NOxemissions below the Ultra-low sulfur diesel (ULSD) baseline.

APT is on the cutting edge of tailoring its additive technology to biodiesel feedstocks, optimizing performance and emissions benefits as well as creating the ability to mix higher volumes of the biodiesel with the diesel. Many parties involved in the fuel distribution chain consider biodiesel traditional fuels instead of what they are – chemicals.

Because APT has built its technology around chemical, mechanical and combustion sciences, it is well suited to work with any member of the biodiesel distribution chain to help the ultimate customers achieve their overall combustion objectives. Technically, APT has developed proprietary additive packages that keep biodiesel emulsions stable and also incorporate elements to address several problems inherent with biodiesel. In fact, APT’s technology includes chemicals that activate the biodiesel to chemically support the overall emulsification system.

Most technologies reduce either NOx or PM, but emulsified biodiesel will allow diesel fleet operators to reduce both with one technology. In addition, APT intends to partner with other technologies to combine emulsified fuels with retrofit hardware such as diesel oxidative catalysts to achieve maximum emission reductions created by specific synergies from emulsions. 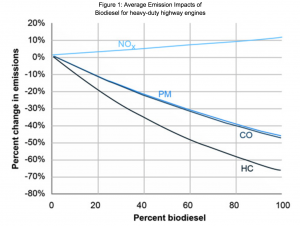 APT has obtained a developmental fuel waiver from the State of California allowing the sale and distribution of EBF in the state as an experimental fuel.

European countries can be viewed as a template for future biodiesel production and consumption in the U.S., because biodiesel has been widely used in Europe for more than a decade. Figure 2 illustrates that growth in European biodiesel consumption has risen dramatically over the past several decades. 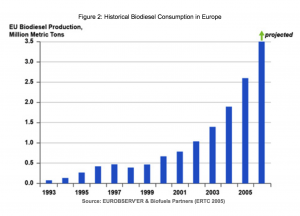 The use of biodiesel is growing exponentially in many regions of the world, particularly in Europe, South America and the United States. In Europe, the production of biodiesel exploded five-fold to 800 million gallons in 2005 from 1999 volumes. While the United States lags behind Europe in total volume produced, recent political and regulatory changes are expected to dramatically boost the 2005 volumes of only 75 million gallons.

At the same time, there is growing concern about NOx pollution that contributes to the formation of ozone and urban smog. California has mandated NOx reductions in numerous fleets and will be expanding those regulations in 2010 to off road fleets. Biodiesel increases NOx emissions (based on numerous reports including those published by the USEPA) so governing authorities in the US have hesitated to recognize biodiesel formally until more data is gathered and analyzed. APT is uniquely positioned to offer regulators and fleet operators a technology that solves the biodiesel NOx problem while helping them meet the goal of increasing the use of low carbon fuels, such as biodiesel.

1) These NOx increases are further illustrated through a National Biodiesel Board “Emissions Calculator,” which can be found at:  Emulsified Biodiesel Webpage.  The calculator allows biodiesel users to determine percentage increases in NOx for a given biodiesel blend, i.e. B-20, B-50.